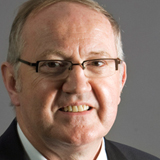 Since his first year as a trainee, Mr Laporte’s main interest has been liability law and traffic law.

Received his law degree from the K.U.Leuven in 1975. Has been a member of the Brussels bar since 1975.